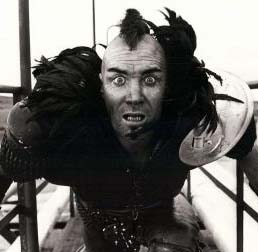 Special Appearances by Vernon "Wez" Wells throughout the event!

7 or 8 pm: A "Pre Party" occurred at the Broadway Brewhouse with live music for participants. The band, Double Dose, played cover songs, including a version of "Licorice Road."

2:00 pm: A "RUN" for film replicas, inspired vehicles, muscle cars, and fans. The Run that preceded the cancelled movie marathon lasted approx 30 min and covered as many miles. We left Javelina Harley Davidson and traveled south/southwest around loop 1604 to HWY 151 and terminated in the Alamo Draft House Cinema's parking lot, where police cars swarmed us in response to 911 calls made by local citizens. 12 were arrested.

4:00 pm: A Mad Max Movie Marathon consisting of a screening of all three movies in the series Mad Max, The Road Warrior and Mad Max beyond Thundedome was cancelled at Alamo Draft House Cinema. The owner of the theatre was faxed a "Cease and Desist" letter from MGM's lawyers, threatening legal action if the films were shown. Apparently, permits were not acquired prior to the showing.
The staff at the Alamo Drafthouse Cinema was very accomodating and generously showed us their support. It's a great theatre with great food. Try it out!